Millworker who became a great musician

Millworker who became a great musician 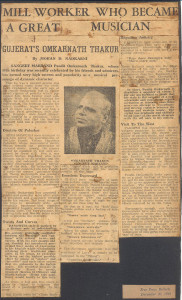 The article as it appeared in the Free Press Bulletin in 1948.

SANGEET MARTANDA Pandit Omkarnath Thakur, whose 50th birthday was recently celebrated by his friends and admirers, has earned very high esteem and popularity as musical personage of a dynamic character.

That he was a musical genius was quiet evident right from his childhood orphaned at the early age of 14 Pandit Omkarnath had to undergo all rigours of property which prevented him from having good education. Whith his heart yearning for music, he had to earn a living as a mill-worker, his burning passion for music, however, begun to assert itself in many ways. That was how a wealthy Parsi gentleman, set Shapurji Dungaji, once heard Omkarnath singing in melodious voice, he shrewdly saw that the budding songster hel out a promise for the future.

SETH SHAPURJI soon managed to put him under the guardianship of the late Pandit Vishnu Digambar Paluskar, whose monumental contribution towards the permeation of national music among the masses would be equal by few and surpassed by fewer still. For, it was Pandit Vishnu Digambar who first bought music to the profane and the secular, and redeemed it from the swiftly deteriorating private patronage of the rich. By initiating ‘Jalsas’ (music concerts) the late Panditji made the masses patronize their art. Young Omkarnath strongly influenced by his gurus selfless devotion to music. The pupil zealously accompanied his great master during the latter’s country-wide missionary tours.

Pandit Omkarnath has acquired a manly and powerful voice after years of persistent and systematic training under his master. The tonal range of his voice is amazingly wide, and Panditji’s handsome and dignified personality happily accords with his militant voice. His fine physic, his flowing hair and flowing robes never fail to impress his listeners.

PANDITJI’S style is marked by a distinct note of individualism.

Omkarnath Thakur was among the more well known Hindustani classical vocalists from Gujarat.

His melody gracefully oscillates between the ‘asthais’ and ‘antras’ with artistic twists and curves. With his rare insight and art, Panditji has intrioduced newer and finer modes of expression in his Khayals while scrupulously retaining their traditional character. In his songs, he professes to bring out the highest possible effect by means of ‘shakes’ and ‘tremolos’ and such other graceses that are unknown to the Indian music. His recorded Khayals in Shudh-Nat (Karat ho mose), Desi-todi (Karam ki chaya) and Shudh Kalyan (Bolan lagi papihara) would testify to this fact.

At times, a full and free scope is given to ‘Taans’ to highten the mood of particular Raga. In his song.

“Mai Kanth Mora Ho” (Raga Sughrai) ‘taans’ flash out in profusion and vivulty bring the material quality of the Raga.

IT HAS been customary to associate certain ragas with specific emotions and timings. Pandit Omkarnath is a believer in the marvels and mysteries of music. He thinks that some Ragas are named from the mood, they wish to suggest, while others are associated with the particular timimgs of the day of night or season, as the case may be.

Be that ae it may, his ‘Todi’ does indicate pathos and a feeling of solitariness :

__while his ‘Multani’ exhales that typical strangeness of evening time

When he sings his facourite ‘Nilambari’ in a mournful way:

__Our hearts silently drop down in utter dejection and despair.

The Shringara sentimate (i.e. the sentimaent of Love) is sought to be indicated in his “Tilang”

PANDITJI’s light songs are of an advanced type. They have a classical appearance; nevertheless, they are executed in a lighter vein with a beguiling artistry.

These Gujaratisongs are the finest specimens of his light music. His other recorded songs, viz., Deshkar (Jhanjariya Jhan ke), Tankeshri (Malan layi chun), and Champak (Emag jaiye ho) have proved to be a very popular for their fineness and delicacy of performance.

In short, Pandit Omkarnath is doubtless a songster of vision. I for one am inclined to think that his style is the outcome of a conscientious and continuous experimentation at attaining something new,- an attempt to co-ordinate and develop contracts between the Indian and Western music. The stylist has gradually and skillfully fused sum up the novel elements with the old ones in his melody.

Visit To The West

PANDITJI has extensively toured western countries in order to acquaint them with the charm and power of eastern music, and received wide approbation wherever he went. His vocal recital at the International Music Conference at Florence in 1933 was indeed a unique event. By his spectacular ‘debut’ he convinced his music-minded listeners that our country is also rich in her musical heritage. Panditji was granted an audience by Signor Mussolini. Mussolini was strongly charmed by Panditji’s militant melody, and he asked his musician to get some of the Indian Ragas notated.

Pandit Omkarnath looks upon music as a great heritage of human spirit, and he has sponteniously devoted his life to its appreciation as well as creation. The versatile scholar has fully imbibed the technique of music that has come down to us from vedic times. Panditji’s great ambition is to setup a Research Laboratory with a view of carrying out practical experiments of various tunes and their effects referred to in the Vedas.

Fortunately enough, our National Government have also recognized the importance ofv music and the desirability of opening regional academies to facilitate research in music. I have no doubt that musicians of merit like Pandit Omkarnath Thakur. Would come together and play their nobel part in bringing about the fuller development of this great cultural heritage of ours.